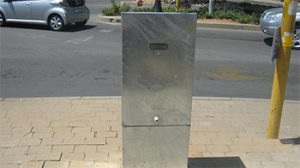 Many of the City`s 2,111 traffic signals had old controllers, some dating as far back as 30 years ago, when the municipality manufactured its own controllers. The process of replacing these 600 old controllers started about three to four years ago, when spares for this out-dated equipment became difficult to acquire. Maintaining signal controllers when they have exceeded the age of 15 years is uneconomical, so it is more effective to replace them altogether. The new controllers, costing between R25,000 and R50,000 depending on the number of phases required, will incorporate latest technologies (remote monitoring, GPS clocks) which will greatly reduce synchronisation and timing problems and improve fault response times.

Another problem encountered is that of ageing traffic signal power cables, dating back to the era when cables had lead or paper covering, making them susceptible to water seepage during rain causing the traffic signals to fuse.

To this end, the JRA is undertaking a geographic information system (GIS) project to identify all street equipment, including traffic signals. This will assist in the life cycle management of old equipment.

In 2006, at the time of previous load shedding, the JRA installed 200 back-up batteries (UPS) which provided up to seven hours of back-up in cases of power cuts at key intersections citywide. However, they were all stolen late last year. The JRA will reinstate 50 of these UPS, but will protect them with secure, heavy-duty cabinets. JRA has tested this at Wemmerpan Road, which is a major problem area for vandalism. Thieves excavated the UPS, but were detected by the security system installed there. The JRA has learnt from this incident and will now further secure these UPS batteries.

The JRA has initiated an Infrastructure Protection Unit, which has started a forum comprising other city entities, the National Prosecuting Authority and SAPS, to co-ordinate all efforts to combat vandalism and copper theft.